DWS Mutual Fund has murdered the business ethics right under the nose of SEBI and AMFI and no one seems to have taken note of it.

BACKGROUND : -
DWS Mutual Fund used to offer free life insurance to individual investors investing in DWS Tax Saving Scheme. In the unfortunate event of the demise of an investor an amount equivalent to five times the invested amount will be paid to the nominee. (i.e. Amount Invested X 5, subject to a maximum of Rs.5 lakhs per investor)

This was the offer when you were investing in the DWS Tax Saving Fund. The DWS people changed the Insurance Limit to 2 times of your investment from the original 5 from January 2010.
And, now, in a swift move have KILLED the ethics of Mutual fund business by reducing the Insurnace Coverage from the original 60 years to just 50 years. And the most shocking part of the decision is that this will be applicable to even those investors who have ALREADY invested even before January 2010, citing the most crazy excuse of High Insurance Costs. Probably they are the feeling the pinch of the Zero Entry Load the most, mainly due to the Sky High Salaries and Bonuses they pay to their Mutual Fund people.

I myself have seen many new investors coming to Mutual Funds (instead of Insurance) purely on the basis of this FREE Insurance Coverage upto 60 years.

Yes, DWS People have the right to modify the Insurance part, but just spare a thought to the poor investor who would have NOT taken any Insurance on the basis of his investment in DWS Tax Saving Fund. 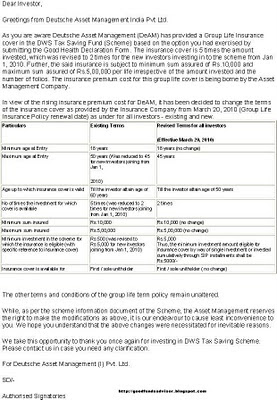 The least the DWS could have done was to CONTINUE the Insurance Coverage upto 60 years for EXISTING investors. But, they have gone right ahead and done the most unethical.

I hope, someone from the AMFI wakes up to this and directs DWS people to continue to extend Insurance Cover to at least existing investors upto 60 years.

The move by DWS only goes to further emphasise the point of NOT to combine investment with insurance which makes it a poor investment decision. It makes better sense to opt for pure term plans, which are low-cost insurance and invest the remaining amount in a good mutual fund scheme.
Also visit http://equityadvise.blogspot.com
at March 26, 2010