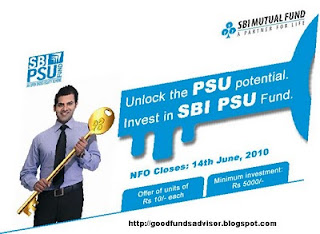 The PSU investment theme looks quite promising as PSUs have strong fundamentals and are generally leading players in their industries. These companies also showed greater resilience than their private sector counterparts during the economic downturn.
Read http://goodfundsadvisor.blogspot.com/2010/06/why-psu-funds.html
While most analysts would blindly recommend SBIPSU Fund over Religare PSU Fund., I would take a contra view and say AVOID SBI PSU FUND AND INVEST IN RELIGARE PSU EQUITY FUND.
WHY RELIGARE SCORES OVER SBI
Here are the key reasons for the same :
1. Equities Outside PSUs :
While SBI has the mandate to invest upto 35% outside the PSU basket, Religare does not. While this may ensure diversification, this also means that the PSU THEME IS DILUTED IN SBI PSU FUND.
2. High Exit Load :
While Religare has an Exit Load of 1% only upto 1 year, as with most funds, shockingly, SBI has exit load for 3 years.
3. RELIGARE'S BETTER PERFORMANCE :
Religare has beaten SBI in almost all funds in terms of performance over 1,2,3 year period. It just shows Religare has performance to back up its claim of being a better fund to invest in.

SPECIAL TIP
Religare has already invested its Assets. More buying in the PSU Stocks by the new Funds like Sundaram PSU Fund and SBI PSU Fund will benefit Religare PSU Equity Fund which is already fully invested. The Scope for Value Unlocking of Public Sector Undertakings is huge and PSU funds  are poised to take advantage of these.
If you are convinced about the PSU story, then you know which fund is a better proxy to play on the theme.
Best of luck,
Srikanth Matrubai
Also visit http://equityadvise.blogspot.com
at June 07, 2010