BREAKING NEWS !!!
Zinedine Zidane returns to Real Madrid: ‘When the president called, I could not say no’
Link
https://bit.ly/2ET3ZJk

He was sitting on the sidelines for the last 10 months & watching the massacre/rout happening at the Club, (Similar to the mass slaughter of small & midcaps last year)., while he was enjoying his break/holidays.

He was enjoying what the Coaches(Julen Lopetegui & Santiago Solari),The Club President(Florentino Perez) & the Players were going through after he departed..

Similar to what the AMCs,Fund Managers, Advisors & the Investors were going through in the last 1 year.

He knew that this would have happened to him as well,if he had stayed with the club..
But,he knew the Exit strategy very well.

When the  Club President asked him to be the Coach once again after they went through a bad patch, He latched on to the opportunity once again.

Whenever the going is good,Don't take it for granted..Kindly re-analyse the situation & then take a decision..

When Cristiano Ronaldo departed from Real Madrid to Juventus after he had differences with Perez.
Zidane knew that the Prime performer is leaving the club after scoring 451 goals in 438 games for Real Madrid in 9 years..
It is tough to replicate the success they had in the recent past without him,Bcoz CR7 was the mainstay,where Zidane's strategies/plans revolved around.

There were lot of expectations by the Fans & the Management after reaching the Pinnacle of success..
After the BIG underperformance by the  Club in the last one year.
The expectations of the fans & the management will be less.
(Similar to the low returns expectations by investors after a bear market.)

Zidane picks up the mantle again as a Value Investor.

He has never harmed his reputation after lot of things went wrong with the club in the current season.

The Club's President,Fans & Players are looking forward for him with breath of fresh air..

I will end with WARREN BUFFET's famous quote which the FRENCHMAN(ZIDANE)has executed perfectly..


Also note...
Zidane is not GOD or 100% perfect.
As player...he acted on impulse and headbutted opposition player Materazzi in 2006 World Cup finals and regeretted later for a long long time. Just like Retail Investors do.....getting carried away by Bull Markets and trying to do something like a Superman!! 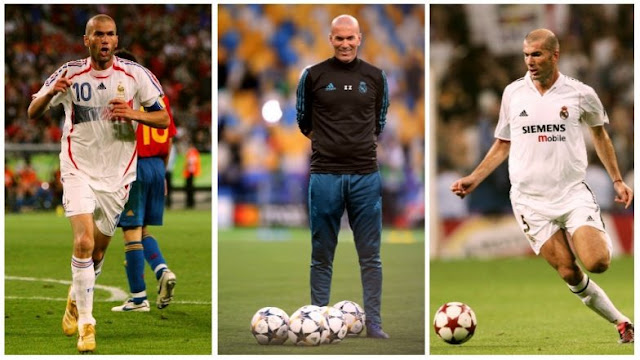 We are here talking about Zidane the Coach and not the player.

Fantastic transformation in the behaviour from a Player to a Coach..
👏👏👏


The story of Zidane the player and Zidane the Coach also shows that an ADVISOR is an absolute must.
An Investor behaves like Zidane the player.
But under an able Advisor...he transforms himself and becomes much matured.
You, as an investor, cannot learn all the lessons AFTER MAKING THE MISTAKES BY YOURSELF.
That would be pure disaster.
An Advisor would have seen all such mistakes made by innumerable investors and would have drawn a blueprint of
WHATS GOOD AND WHATS NOT GOOD for investment.
you need to follow the Advisor for your benefit.

If you do not know when to enter and when to exit....
just follow
a) Your Advisor
or
b) Asset Allocation.


All the best...
Regards,
Srikanth Matrubai


We Professionals too need a break and as Financial advisors its all the imperative that we took regular breaks.
On Similar pattern, I am also a member of a Sports Group in Whatsapp where we discuss almost all sports thats happening on the Planet with lots and lots of passion.

Sometimes, our DNA of Investments does come into picture and we tend to compare the sporting events/achievements/failures to Wealth Creation.

Our group has experts across the Sporting spectrum and most importantly the entire group consists of only those associated with Wealth Creation and hence the perception is completely different from the normal routine.

In our group one Mr.HARISH KUMAR is absolutely brilliant in his analysis.
The above is one of his analysis in the group.
With his due permission, I have posted the above.

Thank you HARISH  for being gracious enough to let our readers get the connect between Zidane and Investment!!!!

Email ThisBlogThis!Share to TwitterShare to FacebookShare to Pinterest
Labels: Fluctuation