Kingfisher Airlines Limited Formerly known as Deccan Aviation Ltd. The Group's principal activity is to provide commercial passenger airline and a private helicopter and airplane chartering services in India.
After the Annual General Meeting, I had a chance to talk with the “King of Good Times”, Dynamic Chairman of Kingfisher Airlines, Dr.Vijay Mallya. 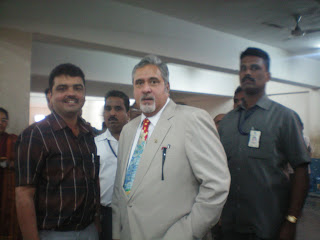 He announced “the worst is over for the Airlines Industry. Kingfisher Airlines Fundamentals is getting stronger by the day and we will start to break even from this month itself.
“I think the worst is over and there’s no reason why private equity investors who had expressed interest when oil was at $100 a barrel shouldn’t be more interested when oil is $36 a barrel,” Mallya said

SEE VIDEO OF DR.VIJAY MALLYA HAVING LUNCH WITH WE, THE SHAREHOLDERS ;
video He said once the Govt brings the ATF under the ‘Declared Goods’ category, Kingfisher Airlines will immediately reduce fares.
“We can pass on pretty much majority of the savings and that would be good for the industry, make air travel even more affordable and stimulate an industry that has slowed down considerably,” claimed Mallya.
.
"Kingfisher will be the biggest airline in India by 2010 not only in terms of market share, as others claim. In all the aspects, it will be the biggest. Wait and you will see," he said, dismissing all related questions. Hyperbole? Like the man says, we will wait and see.

MY TAKE :
At least in Near Short Term of upto 1 year, things are looking much much brighter than it was in anytime of the Kingfisher’s history. The operations costs are lower and there are no visible signs of going up, and, the Airfares are not being reduced and surprisingly, the load factor is going up, which should all add up to “Good Times” for the Kingfisher Stock. Can expect an upside of at least 40% from here and expect the Stock to reach at least 50-55 by June End 2009. Buy in Small quantities as “Contra” Pick. The stock could be the Dark horse of 2009.


Also visit http://equityadvise.blogspot.com for an indepth Equity Analysis
at March 19, 2009