Had an opportunity to have a chit chat with Sunil Singhania, the soft spoken Head of Equities, Reliance Mutual Fund.

He was positive about the markets going forward. 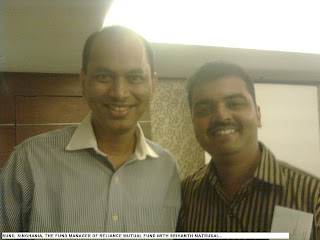 He said "the recent sell off will now encourage fence sitters to get into the markets now, especially the Long Term Money may not get such cheap valuations."
"The repeat of 2008 market crash is unlikely. Things were different then...the situation is much much better now. There is absolutely no need to panic and I would rather look at this sell off as a BUYING OPPORTUNITY"
On Economy he revealed "India growing at 7% compared to 8% last year is a slowdown, but India normally takes 3 forward steps and 1 backward step, and I would say that the 1 backward step has been taken and the future looks only rosier and India is a good bet for Global investors.
Inflation is showing definite signs of cooling off which should ensure that Interest Rate hike is done away with"

On Reliance Banking Fund : "Banks tend to grow 150% more than the GDP and the fact that the Indian economy is under banked, the Sector is very attractive. The interest too is near its peak, if not peaked already, the Reliance Banking Fund is the Fund for not just the Aggressive investors even for the average investor, especially if he is investing through SIPs".

On Reliance Pharma Fund : "Pharma as a sector has done tremondously well in the past. While valuations are looking stretched, you should remember that growing health consciousness and India as a Medical destination getting attention will hold the Pharma sector in focus".

On Reliance Infra Fund : "yes, the fund has disappointed many investors. But the peaking of interest rates angurs well for the sector. And moreover, if you have observed, many companies have been shedding excess baggage by way of diluting stake and in some cases, selling off the unrelated business which increases their focus on their Primary business. We are looking at companies which have a sustainable business model and the revenue is visible and we strongly believe that this Fund has a huge potential above average return to Long Term investors".

On Reliance Gold Fund : "Gold was in a different orbit for the past 2-3 years and would find extremely difficult to replicate the same kind of returns. Look at Gold more as a hedge and a defensive bet rather than as an investment avenue which will fetch you huge returns"

Finally, when asked for 1 single advise he would like to give investors, he said : “Do not let the short term movements affect your long term asset allocation. Stay invested in weak markets, you will make loads of money’..