​​
Akshay Tritiya, is a holy day for Hindus and Jains. It falls on the third Tithi (lunar day) of Bright Half (Shukla Paksha) of the pan-Indian month of Vaishakha and one of the four most important days for Hindus. It is an auspicious day of the birthday of Lord Parasurama who is the sixth incarnation of Lord Vishnu. On this day Veda Vyas began to write Mahabharata. Jains celebrate this day to commemorate Tirthankara Rushabhanatha's ending of one-year fast by consuming sugarcane juice poured into his cupped hands. – Courtesy - wikipedia

The word "Akshay" means the never diminishing in Sanskrit and the day is believed to bring good luck and success. It is believed that if you do charity on this day you will be blessed.

The day is considered auspicious for starting new ventures: Assumed to grow and bring prosperity.

Now let's get into reality....

Akshay Tritiya is very popular if I remember right, especially in the last 15 years or so. Jewelers’ utilized this opportunity and positioned in such a way that everyone should buy gold and it is hugely success as well.

28th April 2012 gold price were trading at 29,107 and it was closed yesterday at 28,875. One more observation is, even if you take it, year on year performance from the day one bought it has never increased, emotion plays a bigger role when it comes to investing to many of us, so without calculating anything we keep buying. Here, it is only blind faith and never verified!

​
I have observed one more thing, let us assume somebody has not invested lump sum and they have invested through monthly chit (which is very popular in Bangalore, not sure about other states) and the value is one and the same. It clearly indicates passive investment will not work. See the below table of Gold Investment in SIP.

I have given you some of the mid and small cap funds which were popular in those days and their returns and anyone can see their own investment returns or any other fund they feel it’s a good fund. I have provided just for illustration purpose only. I used to say jokingly to all my clients, if you invest in GOLD you can give X amount to your daughter and if you invest in mutual fund it will be at least 2X, you decide how much you would like to give your daughter!!!

​
International gold price has touched all time high as on 22nd August 2011 as $ 1,917.90 per ounce and yesterday closing price is $ 1,268 and it is down by 33.85%. In the same time our rupee has weakened from 45.66 to 64.23 against USD. There is an absolute increase of 40.67%. I am not here to predict what will be the gold price in future, but one thing I can be rest assured is there will not be much appreciation henceforth from the currency.

My humble submission to everyone is never buying gold as an investment, buy gold as an ornament which you constantly wear. Do not start any gold investment even if you have girl child. Gold is important for the marriage, but it does not mean that we should invest only in gold!

Last, but not the least investment have no emotions, so whenever you invest do not show emotions. Gold and Real estate investments are more out of emotions which is proven now. Real estate has also not grown much in the last 5 years, but it is not regulated and no such data available I am not in a position to give any data.

SOME INTERESTING FACTS ON GOLD :

1. Most of the gold digged from time immemorial is still in circulation.

So we may even be using the some of the gold (recycled) that was used in the times of Rama, Krishna, Buddha and Jesus.

2. The quantity of steel poured in an hour in our planet is more than what has been poured for gold since the civilization. That is how limited the availability of the gold is.

3. It is estimated that total gold available (in circulation and storage) in the world is 1,65,000 tonnes.

4. 75% of the gold available today has been extracted only after 1910.. The Pace of extraction is quicker!!

MOST IMPORTANT :
5. If you are worried that gold’s supply would get exhausted soon, fear not!

About 10 billion tonnes – 10,000 million tonnes (yes, you read it right) of gold is estimated to be held in the oceans of the world. An economically viable model of extraction is being explored.

Necessity is the mother of invention. If gold prices continue to rise and if the demand would only increase, who knows, a technological innovation can happen in extracting gold from ocean.

AND FINALLY, THE BOMB :
10mn tones under the sea is eye opener. Same happened with oil; eventually people dug under the sea after land sources were well discovered and prices kept climbing- oil came from sea!

Its the Multi Stage Fracking Technology that changed equation for oil.
Offshore was there, but the shale gas was the real gamechanger.

And Crude Oil was never the same again.

so, maybe maybe some day going forward something in technology breakthrough could just help us in laying our hands on that 10 billion tonnes of Gold lying in Oceans.
and Like Crude Oil..the price of Gold is bound to go down...
Waiting for that day!!!!!!!!

REMEMBER :
Gold is not an investment. Gold is an allocation in Indian Households. Continue buying gold in SIP for a specific purpose & allocation.
Your wealth grow as per the potential of the asset you invest.
Potentials of  some financial assets are.
Idle money in SB A/c ~4%
Bank and Post office deposits ~7-8%
Traditional life insurance policies ~5-6%
ULIP plan~ 8-9%
Gold 8-9%
Equity mutual funds~12-15%
Provident funds ~ 8%
Whatever wealth you have accumulated today is a result of where your investment was done in the past.
FINALLY,
****
If you would have bought 10 gram gold on the Akshaya Tritiya of 2002, it would have costed you Rs.5,000/- ; at today's Akshaya Tritiya, your gold is worth 30,000/- a Growth of 6 times! 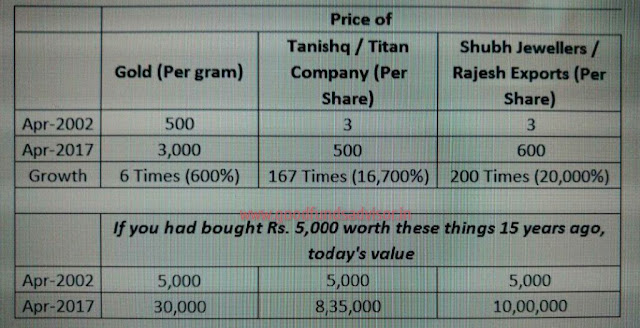 Well, with the same Rs.5,000, if you had bought the shares of one of those jewellery companies (Titan company, which owns Tanisq jewellers or Rajesh Exports, which owns Shubh Jewellers), your 5K should have grown to 8 to 10 lakhs...Growth of 167 to 200 times (that too ignoring the dividends)
Happy and 'Prosperous' and ENLIGHTENING Akshaya Tritiya!
http://www.goodfundsadvisor.in/2012/11/avoid-jewellers-gold-savings-scheme.html

Thanks to Padmanabhan and Muthukrishnan for valuable inputs