There is a huge bombardment of articles, posts, trolls on Mukesh Ambani's daughter.
Its his money folks and he has every right to blow that money in whatever way he wants. 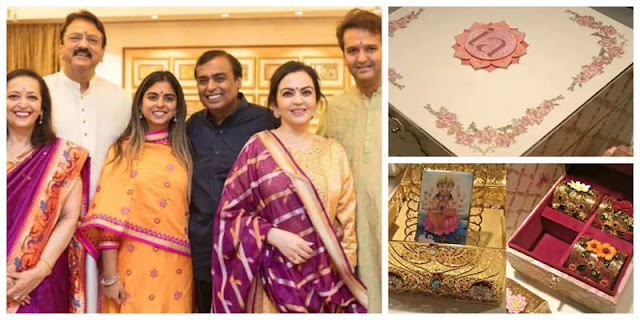 The only concern I have is....people LESS RICHER than him will start upgrading their spending on Weddings and get caught in a Financial Mess.

In India, for centuries, Weddings have been an union of two Families.
Its a declaration of love and affection between two families getting together.

The Digital Age with its info on BIG FAT Weddings of the RICH AND WEALTHY has revolutionised the way marriages are being conducted these days.
.

MARRIAGES HAVE BECOME AN EXCUSE TO SHOW OFF :

Now a days it is trendy to have Custom Weddings be it
Destination Weddings,
Royal Weddings,
Beach Weddings,
even Sky Weddings!!!
Every other couple (even the parents) want their WEDDING to be something Different and bigger than the recent one.
So, it has to be latest Designer clothes, the Candid Photographes, the Best of Mehandis, Imported Flowers, Larger than Life MENUs from across the Globe.....!!!!

ITS NOW THE AGE OF LARGER THAN LIFE WEDDINGS, CLEARLY BECOMING AN EXCUSE TO SHOWCASE YOUR WEALTH

And, know what, the most unholy of all (at least for me) is the RETURN GIFT.
This is where the HOST wants to SHOW OFF and sky is the limit nowadays.
Going overboard would be an understatement.

SPENDING TO "OBLIGE" THE SOCIETY
Couples as well as Parents need to be practical and grounded.
It is we who are responsibile for our requirements, not the society
We need to save for our requiremens, society will not.
So, why do you need to SPEND Lavishly just because your cousins have done it.
Never get into such a trap.
Spending MORE than your capacity will land you in serious Financial Trouble later on.

We should learn something from him.

Many people also take loans for marriage..
We should learn from these rich people..
How simple and sober marriage that was..!
No foreign destination wedding..
No rented marriage Hall.
Whole ceremony in his own house..
Reception also at his own garden (Jio garden)
The guest themselves were serving food..
Such a small close-knit family function..

Remember, YOU are the one who has to RE-EARN all that is spent, especially if you have lots of financial commitments.
Society will NOT come to your rescue. They will be the one later BLAMING you for spending recklessly on the marriage (of course, after enjoying those lavish Buffet spreads and the Return Gifts).
Gyan Givers will be dime a dozen post marriage.

Well Wishers, like Srikanth Matrubai, will be rare who will give you gyan before spending your Hard Earned Money!!!

ASK YOURSELF BEFORE SPENDING


AND, IT GOES WITHOUT SAYING, HAVE A SEPARATE GOAL FOR MARRIAGE......AND THEN, WHY NOT......YOU CAN EVEN GO FOR A LAVISH GRAND SPECTACULAR UNPARRELLED MARRIAGE.

Yes...
A Lavish Wedding can be yours and completely stress free both mentally and financially if you plan well in advance and have a SIP towards that.

Finally, wherever possible, try to give gift to Newly Married couples Equity Shares, Mutual Funds as GIFTs rather than fancy SHOWOFF articles which will be banished to Corner of the Room within no period.


Equity Shares and Mutual Funds will help the couples in their Finances and who knows just your Gift itself could grow to such a huge corpus that they can spend that Mutual Fund / Shares amount on their Children's Marriage!
Just imagine how thankful they will be to you.

Wish you all the very best.

This post has been inspired by the huge number of messages, posts, jokes on the famous AMBANI family marriage.....there may be some points taken inadvertently from these posts.
We acknowledge them
at December 20, 2018