Charles Ponzi, an Italian immigrant settled in America launched a Scheme in 1920s promising investors to DOUBLE their money in 90 days.
The idea seemed very realistic wherein Mr.Ponzi would simply sell the American Stamps at 6 cents against the cost of the 1 cent of the original International Postal Reply coupons.  Clear 600% profit.
Word soon spread about this Italian Financial Magician. 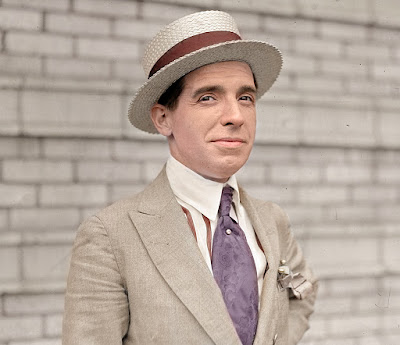 Mr.Ponzi always wear Expensive suits and a charmer with a sweet tongue and great wit.
At its peak, the scheme had nearly 50,000 investors with about $15 million invested (easily at least $200 million of today).

Of course, whenever money making is so easy....something will be wrong and very soon the scheme went BUST and COLLAPSED.
It was later revealed that Mr.Ponzi was paying off old investors from the money he got from new investors and the balloon had to bust some day.
Clear case of borrowing from Peter to pay Paul !

And as it happens in almost all cases, 99% of Mr.Ponzi's investors were from Working class. 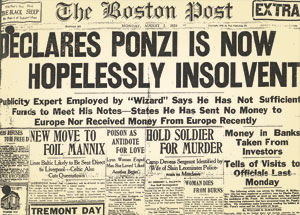 Very soon, all types of frauds connected with investment came to be known as PONZI scheme.

THATS HOW THE PONZI NAME GOT ATTACHED TO ALL FRAUDELENT SCHEMES

Just recently there was a fraud in Bangalore where an ex-serviceman promised high return....high ?....no it was sky high....the return was 5% was 5% per week.....60% per annum and as expected the scheme collapsed.

When you go through all these frauds and ponzi schemes, one common thing which is distinctly noticeable is that they ALL PROMISED HIGH RETURNS without delcaring any risks involved.

I would dare rise my head to say that the ultimate blame must go to the investors themselves.
Greed clearly out shined Common Sense !

Any scheme that promises higher return than 15% should immediately trigger doubts in your mind.


Equity does give you 15% and even above that (so does Real Estate in some cases) but they do over long periods of time and with lots of volatility.

In fact anything even above 12% rings ALARM BELLS in me.

Any investor who brings to my notice about these types of Ponzi shcemes and asks my opinion about them....I simply say that only the returns may come but NOT THE CAPITAL.

The best way to understand whether a scheme is fraud or genuine is when the scheme DISCLOSES THAT IT MAY CARRY RISK OF CAPITAL.

In fact, I have never ever put money in Chit funds throughout my life.
My best friend, who runs a Lodge believes only in Chit fund and he is entitled to his opinion but I have already seen him losing even his Capital in 2 schemes.

BEST WAY TO IDENTIY IF ITS A PONZI SCHEME

The most amusing part of the PONZI  story is that Charles Ponzi himself did not invest his own money in his schemes and instead preferred a palty 5% per annum return schemes like the Bonds, etc !!!!

No SKIN IN THE GAME for him.

So you need to check whether the Promiser himself is putting his money where he is telling us and if yes....how much percentage.
Some operators are smart and invest a portion of money to showcase that they are genuine.....ask them "If the scheme is so good, why are you not putting your entire wealth into it"

2. THE REGULATORY ASPECT :
Whether the scheme comes under the watchful eyes of any regulator. Ask whether the same is registered or regulated by authorities like the RBI, SEBI, AMFI, IRDA, PFRDA, etc

3. BECOME MORE AWARE
Try to find more about the scheme from INDEPENDENT sources (not company website). Anything new/exotic should be throughly researched and cross-verified.

4. WHEN THE SELLING IS AGGRESSIVE
More often than not, the Pyramid/Ponzi schemes will have Aggressive sellers either because of the huge commission they get or the rewards associated with the selling.

5. WHEN THE RETURNS ARE HIGH
If the Bank FD is say 7% and the returns promised is 14% immediately become suspicious. Anything above 12% should always invite doubt and its better to lose an opportunity than to lose your shirt.

6. UNVIABLE MODEL :
Whenever the model of money making seems confusing or too easy it is a sure shot sign of a Ponzi scheme in the making. Money making is not very easy. If it was easy everyone would rush in.
And whenever any scheme is confusing....move away if you dont understand the concept. Of course, do try to understand but if it stays confused and something very exotic, AVOID

7. TRACK RECORD
Who is promoting the scheme? How is their historical payout record? These things need to be throughly checked and only when satisfied go ahea


Its very simple, if the scheme is so good, why are they not putting their entire money and only a part.
BETTER TO BE SAFE THAN SORRY