I was asked to name MY BEST CUSTOMER by BNI  (during our Weekly Presentation) recently and I could think of none other than MAHAVEER SRISRIMAL.

Let me show you why only him and not anyone else.....

The Heart issue in March sealed the fact that I had to take it easy in life from now on.

So I not only decided to move to a new bigger office but close down the existing 2 small offices.
I had to stop running around too


I mean…the Carpenter, the Painter, the Electrician but I knew I had to take the plunge. It was a case of NOW OR NEVER

So after 3 months of thorough search…I zeroed on a location and decided to move there.


The office was a OPEN HALL and I had to set it up in a scratch.
The search for the good electrician, carpenter, painter, was the biggest pain.
I just couldn’t zero in on the right persons.

FINDING A RIGHT PERSON TO SET UP A NEW OFFICE IS AS TOUGH AS FINDING A GOOD FINANCIAL ADVISOR!!! 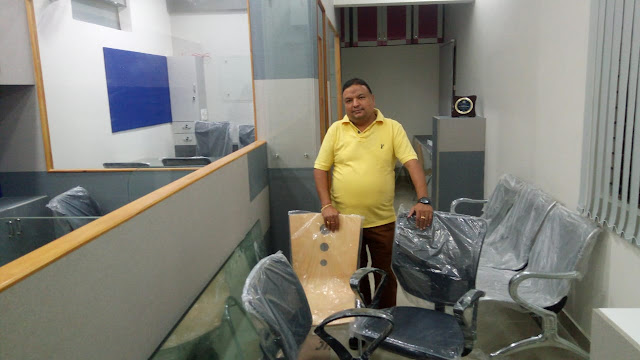 I had almost decided that I would have to compromise either on price or quality, when one of my oldest investor MAHAVEER SRISRIMAL came as a messiah.

Now....not only he took active interest in the design of the Office, but he made sure that the Carpenter, the Painter, the Electrician, the Cable Guy & every one else were selected based on fulfilling all parameters like Price, Quality, Experience, etc

And, as an icing on the cake, he even selected the design of the Chairs, the Colours of Paint, etc
Another thing which was bothered me was the NEW office was the distance from my residence.
It would take half an hour one way amid chaotic traffic and I had to compromise on my business too.
But, yet again, I was saved from this work as Mahaveer ensured that I could concentrate 100% on my business and MAHAVEER SRISRIMAL would come to the NEW office to keep an eye on the Work being done at least 3 times a day.
He would call me every time he came....sent me Whatsapp image and even videos to keep me updated.
In fact, I was so FREE that I even went ahead going to MFRT conference in New Delhi as I knew that MAHAVEER SRISRIMAL is there to ensure that my office is coming up exactly as I want.

He kept a Eagles eye on the work in progress in my new office
Every change in office he would send me a photograph and  video and asked me for my opinion on that
It was as if another SRIKANTH MATRUBAI was looking after the NEW OFFICE.

When I moved in, I felt like moving into a PLUG AND PLAY Office!!

WHY HE HELPED ME??
This question is pretty natural.
Let me put things straight.
About 10-11 years back, when I first met MAHAVEER (he was not my friend...but my brother's friend) & I discovered that he had virtually ZERO investment and no future goals.
We used to meet regularly for a cup of coffee at the SLV HOTEL, in Chickpet and over the steaming hot cup of coffee, I explained to him the benefits of

Cut to  present, 2 of his children's marriage is over and he did have to take out SINGLE PAISA from his business.

EVERYTHING WAS FUNDED BY HIS INVESTMENT IN MUTUAL FUNDS.

To show the gratitude, MAHAVEER felt this is the best way and I would vouch this is  INDEED the BEST WAY.

Thank you MAHAVEER SRISRIMAL.
Will be ever indebted to you and proud to have you as my Investor and most importantly as my FRIEND now.

You, MAHAVEER SRISRIMAL are not amongst my Top 10 Investors in terms of Either Lumpsum or SIP.
But, you are amongst the TOPMOST Investor in terms of GRATITUDE that I have.

YOUR BEST CUSTOMER IS
NOT THE ONE WHO GIVESYOU SALE or REVENUE??

THE BEST CUSTOMER IS THE ONE WHO HAS GIVEN YOU PEACE OF MIND.
YOU, MAHAVEER SRISRIMAL HAVE SHOWN YOU HAVE A HUGE HEART & EMPHATY

I WOULD PROUDLY SAY YOU, MAHAVEER SRISRIMAL, IS MY BEST INVESTOR AND I AM PROUD TO BE YOUR FINANCIAL ADVISOR.

WHAT BETTER DOES A FINANCIAL ADVISOR THAN A INVESTOR LIKE MAHAVEER SRISRIMAL.