IS YOUR MONEY SAFE IN HDFC BANK?

Since this afternoon, an image has gone VIRAL of an image of a HDFC bank passbook 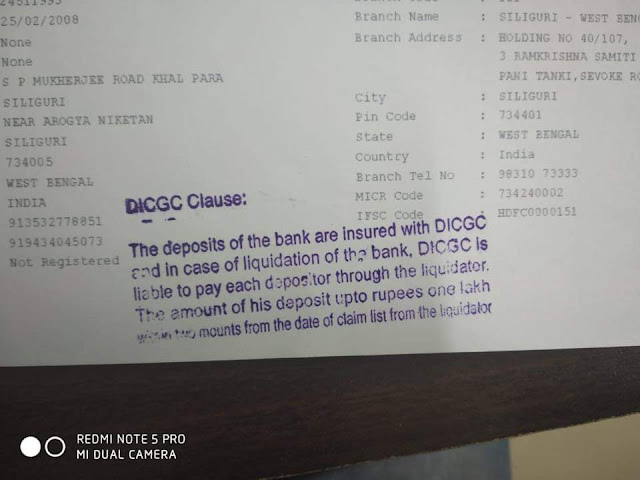 .
HDFC BANK Using Stamp on Passbook and declaring they are not liable to take the responsibility over one Lakh....that means savings upto *ONE LAKH ONLY is safe in Private Banks*
.
.

Along with this message, some people even posted the following message which doubted even the fundamentals of HDFC BANK !! 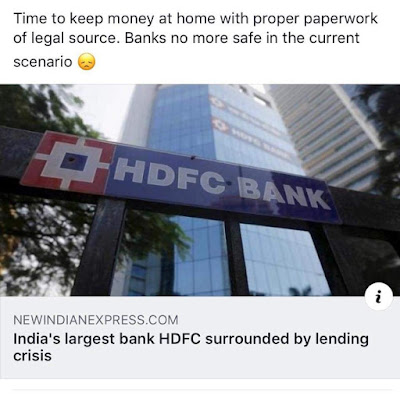 .
I got so many messages and calls from my investors whether they should pull out money from HDFC BANK.

Deposit Insurance and Credit Guarantee Corporation (DICGC), a subsidiary of the Reserve Bank of India GUARANTEES that in case of an unlikely bank failure deposits up to ₹1 lakh is insured and paid back to the depositor.
So in effect whether it's your
PSU (GOVT) Bank SBI
or the private HDFC BANK,
your neighbouring CO-OPERATIVE BANK,
even branches of Foreign banks operating in India
your money is GUARANTEED upto Rs.1 lakh (only) by the DICGC.

The ₹1 lakh limit covers both principal and interest amount.
This amount is PER BANK.


Later, HDFC BANK too came out with a clarification on this. 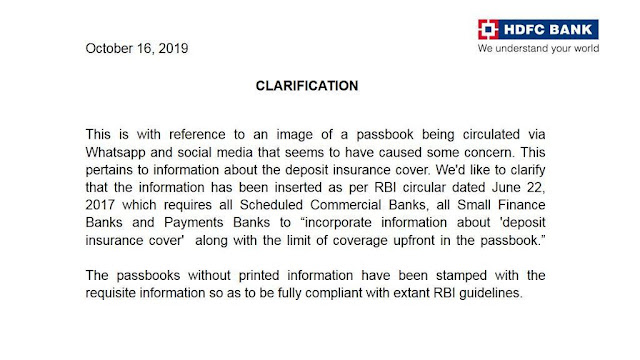 If your bank has NOT paid the premium payable to DICGC in time, in that case DICGC will not pay the said Rs 1 Lakh too.
But never in history has any bank made such a stupid blunder !

The deposit insurance cover was last hiked in May 1993 to Rs 1 lakh from Rs 30,000 in July 1980.
The present Govt is seriously considering INCREASING this limit soon.
It's simple DICGC rule which is printed by HDFC Bank.

In fact, this should be followed by all the banks

In fact, this practice should have been followed long back and followed by all the banks and thankfully HDFC BANK has taken the lead in this direction and deserves to be applauded.

I sincerely request all my readers and investors to IGNORE this kind of malice fake news and rather focus on creating WEALTH.

DO NOT FALL PREY TO MALICIOUS SOCIAL MEDIA MESSAGES

However, one thing which you should make NOTE of is that only 1 lakh is GUARANTEED but any amount above that you may get nothing if the Bank collapses.

So IT MAKES SENSE TO DIVERSIFY YOUR SAVINGS AND INVESTMENTS INTO DIFFERENT BASKETS AND NOT ONLY PROTECT YOUR HARD EARNED MONEY BUT ALSO ENJOY THE BENEFITS OF COMPOUNDING.

FINALLY,
While you already are aware that MUTUAL FUNDS ARE SUBJECT TO MARKET RISK...
It would also be better to be aware that your FIXED DEPOSITS (above 1 lakh) IS SUBJECT TO SYSTEMATIC FAILURE RISK.!!
So, you could look at alternatives to FD like
Liquid Funds,
Short Term Fund
Income Funds,
Do contact your Financial advisor before investing.