Should you EXIT from Reliance mutual fund?

Greetings,
Friends and Investors….its always a pleasure interacting with you.
Wishing you a very Happy Deepawali in advance and hope you had a Dhamaka Dasara.

I have been in Investment field for more than 28 years now (I am not exactly a BUDDHA but just started very young !!!) and I have seen many of my investors becoming CROREPATIS over the years and very soon some of my investors will be graduating to become ARABPATIS too!
Cant wait to see that day.

Mutual funds has been a integral part of Wealth Creation Journey for me and my investors and RELIANCE MUTUAL FUND has been right at the top with its blockbuster funds be it RELIANCE GROWTH FUND, RELIANCE VISION FUND RELIANCE EQUITY OPPORTUNITIES FUND (NOW RELIANCE MULTICAP FUND), RELIANCE SMALL CAP & in recent times, RELIANCE RETIREMENT FUND.

Many of you would have invariably invested in some of these funds and would obviously be worried, concerned after hearing the news that the Reliance Mutual Fund is changing into NIPPON INDIA MUTUAL FUND. 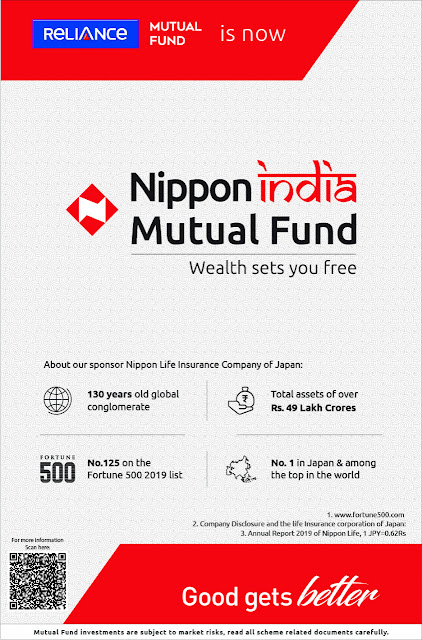 THE BACKGROUND FOR THE CHANGE :

This change has been necessitated because of Reliance Capital’s decision to sell its stake to their Japanese partners, Nippon Life International.

BACKGROUND OF NIPPON
Nippon Life International is Japan’s largest and Asia’s second largest Insurance Company and was founded 130 years ago. It has been a consistent performer and is now widely recognised as a global player in Insurance and Asset Management.

Nippon Life International is Japan’s largest and Asia’s second largest Insurance Company and was founded 130 years ago. It has been a consistent performer and is now widely recognised as a global player in Insurance and Asset Management.

They are like Japan’s LIC and in fact their assets under management are double that of LIC of India.
Nippon Life is a Fortune 500 conglomerate with 130 years of success behind them.

Being an Insurance Company, they have very sound risk management processes and global expertise.

More importantly, they have been a co-owner of Reliance Mutual Fund since 2012 and have gradually increased their stake, as they developed their familiarity with Indian Asset Management industry.

FOR THOSE WHO UNDERSTAND KANNADA, CAN WATCH MY INTERVIEW IN THE CHANNEL NEWS18  ON THIS SUBJECT BY CLICKING HERE 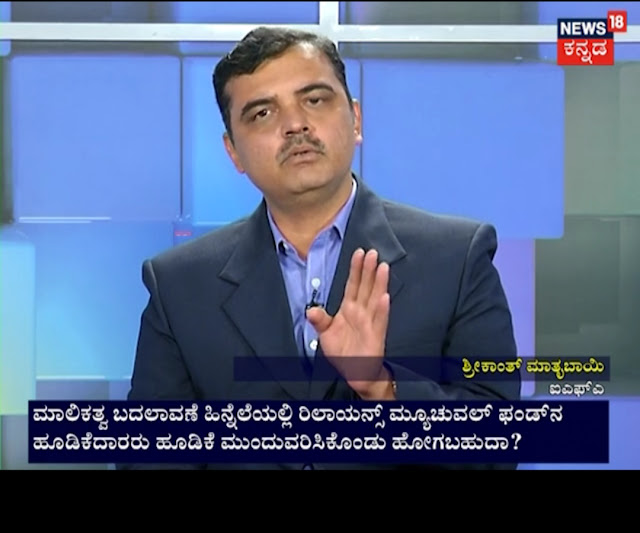 WHAT TO EXPECT FROM THE CHANGE IN OWNERSHIP ?

While you would obviously be impressed with Nippon Life’s stability and global prosperity expertise, you have been keen to understand what to expect from Reliance Mutual Fund schemes after this Changeover.

I want to tell you that the entire management team, the fund managers and the customer service team, everything remains the same. The only change is that you need to now write your cheques in the name of Nippon India Mutual Fund!

For existing investors, the Fund Objectives and portfolios will remain the same. You can expect Nippon Life’s robust risk management processes and expertise in global markets to make your investments in the schemes perform better.

The only difference here is that scheme names will now change. Large cap Fund will now be called Nippon India Large cap fund for example.

SO WHAT SHOULD AN INVESTOR DO?

Will it not be foolish to change the bus now just because the owner has changed.

Likewise just because the owner of the fund you have invested has changed doesn't mean you should jump out of the fund and move to another fund!

So, my advice to you friends is to continue staying focused on your goals and stay invested as there is no change at all except for Nippon Life, a global leader, taking controlling stake in Reliance Mutual Fund.
·         From an investor point of view,  if you are currently happy with your funds and achieving your goals, then it is recommended to stay invested in the funds, there is no need to change anything.

So let’s welcome the new name of our very own mutual fund and sit back and watch our investments being managed with even more robust processes and expertise.

Thank you and wish you a great year ahead.

Watch my interview on the topic in the channel NEWS18