He Was a retired Defence Employee. Post retirement he worked in Air India..He was an ordinary investor to start with ..He  started ,by his own Admission, the journey into *Market* related instruments *very late*. He was about *54 years old* when he had issued a *Cheque* for the *first time* to an *MF Scheme*..

It was the *year 1998* and the Scheme in which my Client's father who was well  *into his 50s* invested a Sum of *Rs.40 k* in The erstwhile *Templeton India Growth Fund*( *now* known as *Templeton India Value Fund*) with the help of A Financial Distributor in Chennai (Madras in good old days)..


The investment made in the Scheme with a Dividend Payout Option was *held* for *two decades and one year* ..During the course of his investing journey,he had *earned handsome dividends* Which grew from very Small amounts in the early stages to a reasonably good amount over the years..


For the past 1-1.5 years the Gentleman Faced lot of health issues and The investments he had made in Mutual Fund Schemes( There were investments in Some more MF Schemes *Valued* at approx *Rs.25 L* )came to the fore to manage the *expenses* beyond the *Hospitalization* related ones..


Though he had the support of three children ,he never approached them to seek any sort of Financial help and Stood on a *Sound Financial Assets base* ..With his Prudent and Disciplined Approach to Personal Finance related issues,he had set an example to his three children on Financial Planning as well in addition to being a Wonderful Father ..


After A long Fought Duel with ill health ,he had finally breathed his last recently leaving a legacy of Financial Savings to his next Gen ..


The Oft repeated Cliché *NAV is Growing But not reflecting in the Account Statement* was proved wrong for a change ..


The well disciplined investor like *Shree D H Jagtap* would always set an Example to the next Generation of investors with their focused approach..


A *buy and  hold* approach which yielded a great result and a *true retail story* of A retired person saving his Hard earned money in an *instrument seldom found favour in those days* ,excited me to write this piece ...


As always I am not the first person to have reported  a similar kind of Experience,  but definitely not the last one to write a story like the above . 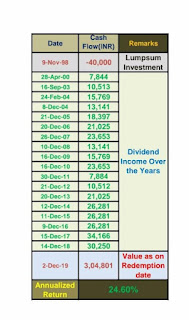 By my dear friend I.S.PHANI KUMAR